What brown can do 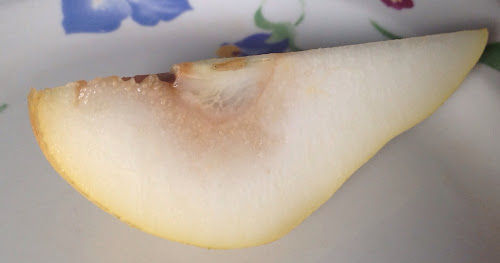 Ever heard the saying that you taste with your eyes first? Humans are usually very visual creatures, and color and appearance fundamentally affect how we judge food, or even if we are willing to eat it. For example, the rarity of blue pigments in nature is thought to go hand in hand with the appetite suppressing properties of food colored blue. Unless you're a kid.

On the other hand, brown is ubiquitous. A by product of the Maillard reaction, many cooking methods center around trying to develop that appetizing shade. Take, for example, the de rigeur sear on meat cooked sous vide, or the boiling of bagels in lye (the increased pH promotes the browning). But this is different from browning of cut fruits and vegetables, like that of apples, pear, and avocado. That is formed by the activity of an enzyme called polyphenol oxidase (PPO) in the presence of oxygen.

In some cases, the browning is desirable - PPO is responsible for the brown color of coffee, tea and chocolate during fermentation. But in cut fruit, this may be considered visually unpalatable - fortunately, PPO can be inhibited by acid. That's why you are supposed to sprinkle lemon juice on these surfaces to slow down the browning.

Or you can just take the PPO out - a fruit lacking PPO just cannot brown. And that's the situation in an engineered product called the Arctic Apple. One common misunderstanding is that non-browning apples conceal rotten fruit among the fresh - this, of course, is a non sequitur. As you can tell, the action of PPO does not really indicate rot at all - the browned surfaces are simply not esthetically pleasing. Or, as Kevin Folta cleverly points out, this is by no means the first time a PPO-free fruit will hit the market: sultanas are non-browning grapes.
Posted by Dr. Ricky at 12/10/2012 11:39:00 AM