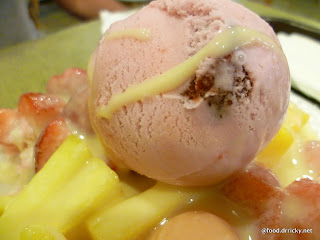 Although most folks nowadays buy ice cream, nothing really quite compares to home made ice cream, where you have control over the composition and flavors. Not to mention the freshly frozen confection has the best mouthfeel, as the longer it keeps, the crystals tend to grow (unless you have a commercial scale freezer).

Before there were machines, making ice cream was a messy affair - the cream had to be frozen while being agitated in a mixture of salt and water. This works due to the colligative properties of water - basically, even though pure water will freeze at 0°C, when something is dissolved in it, that freezing point will drop, such that even lightly salty water will remain liquid at 0°C. And the more concentrated the solution, the lower the freezing point will be.


Trivia fact: Water freezes at 32°F because Fahrenheit calibrated using a salt/water mixture. And he got it wrong a couple of ways.

So, when salt is added to ice, it begins to melt - but the energy to liquify the water has to come from somewhere. If you stick a thermometer in there, it will read colder than 0°C because heat will be drawn out of the thermometer into the liquifying ice. And if there's a canister of liquid cream in there, it'll start freezing, so start churning.

Now, hypothetically, if there's some way to hold this in a perfectly insulated vacuum, adding salt to ice will not allow it to melt as no additional energy can come into the system.

Incidentally, milk and cream is also basically a water-based solution, and thus, ice cream is actually held at a temperature lower than the freezing point of pure water - so why doesn't it cause frostbite? That's a story for another time - but it has something to do with the air that is incorporated when the confection is churned while being frozen.
Posted by Dr. Ricky at 1/03/2012 07:30:00 AM