I've read about the Exmoor Toasts at Feast in Houston. People wax rhapsodic about the combination of anchovy, clotted cream and toasted bread, and I was eager to try them. I've eaten at Feast before, although I didn't get to try Exmoor Toasts back then. But I had great hopes - the unconventional combination (which is potentially kosher if pork fat was excluded) seems promising.

Sadly, to my own palate, the toasts were ... nondescript. The oily fish, combined rich clotted cream, lost its flavorful punch, while canceling out the distinct luxurious notes of the cream. As my dining companion quipped, it may as well have been cheaper cream cheese. Only the crispness of the toast provided any counterpoint. A bit of parsley and lemon would have brought the dish forward. Not that it was a bad dish by any means, I simply found it serviceable and unremarkable. Which is only a poor point given the exalted expectations. 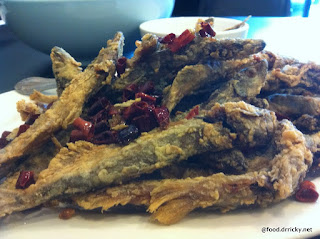 In contrast, a recent visit to Friends' Kitchen (9889 Bellaire) yielded this comparably priced plate of fried female capelins. The smelt, many pregnant with roe, where crusted with rice flour, and seasoned with a melange of chiles and sichuan peppercorns. The fish were eaten bones, fins and all, and each bite was redolent with a punch of mala and a riot of textures from crunchy to meaty. The fish was as addicting as popcorn, and substantial enough to be a meal.
Posted by Dr. Ricky at 12/06/2011 10:41:00 AM