Plantains are the versatile fruit/vegetable relative to the Cavendish banana. Although it resembles a banana in appearance, it is starchy, and almost never eaten raw. The most common method of preparing it is deep frying of some sort. Depending on the stage of ripeness, the texture of the resulting fried plantain varies. When fried somewhat green, you get something called tostones, and the very ripe fruit (the skin turns black), you get the sweet side dish maduros. In fact, for making tostones, the plantains have to be fried twice: once to parcook the chunks, then they are flattened, and fried again to crisp them up. 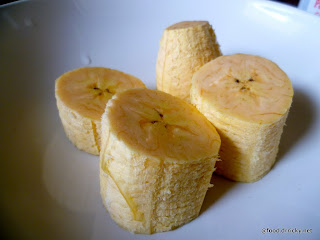 I decided to forgo the heavy use of oil in the traditional prep by using a waffle iron. Also, I chose to use somewhat ripe fruit - the skin is yellowed, but not black. These, technically, would still be tostones. 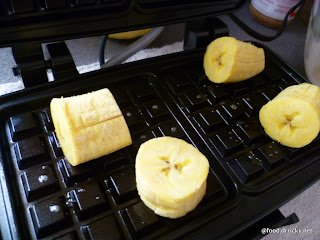 As it turns out, the cooking method couldn't be simpler. I was worried that the parcooking would be required, but if the pieces were cut small enough, it didn't matter. Plantains caramelized (Malliardized?) beautifully on the waffle iron, and we get this cross hatched pattern, alternating crispy with chewy. A sprinkle of kosher salt, and these are addictive. 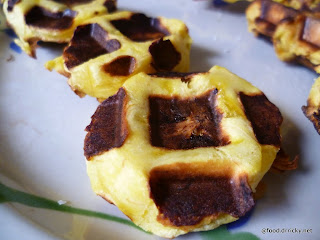 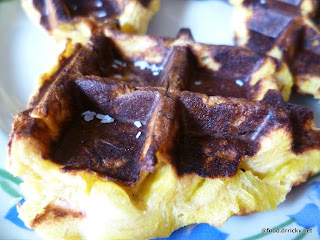