More than one too many, I think

Yes, this is a post about beer. Or is it?

Under the "Brew Blog" category, the Houston Press Eating Our Words blog published a chart describing that a Bud Light has as high an alcohol content as a Guiness. I found the data visualization shoddy, and sought to do a better job of it. Following the links described to beeradvocate.com, I found no direct path to the data used to create the chart. However, the author had kindly provided a second link to a more "scientific study" at theraven.com. 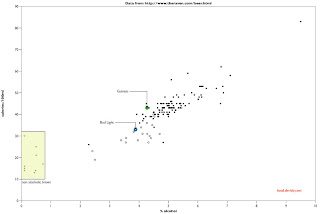 On this chart, open (unfilled) circles are the light beers, and nonalcoholic brews are triangles. Dark circles are the rest. What I immediately noticed is that the data from the two sources cited did not match. Bud Light has a markedly lower alcohol and calorie content than Guiness. Good data visualization enables humans to detect such patterns easily, and a careless job of it can obscure them. Of course, if one cherry picks the sources, then one can report all sorts of patterns, but may have little bearing on reality.

Or perhaps the author has had a little too much to drink while interpreting quantitative data. :)

While we are on the topic, note that calorie and alcohol content pretty much track linearly, although the definition of light beer significantly overlaps with regular brews. On average, regular beers are about 50% more calories, and 30% more alcohol, but in some outliers, the lightest regular brews are as light as the lightest beer, and a German light beer is as potent as a regular brew (up there with Guiness in calorie content, and exceeding it in alcohol).
Posted by Dr. Ricky at 8/31/2010 02:04:00 PM